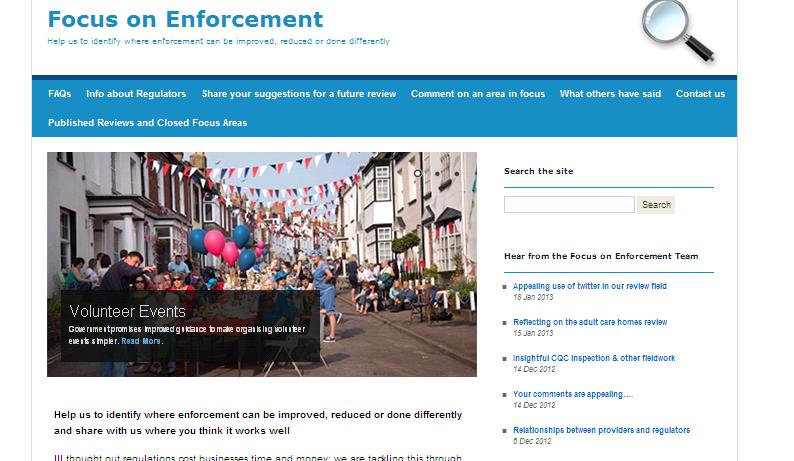 As part of this initiative, we have been undertaking a series of sector-focused reviews looking at the impact on the regulated of how regulations are enforced by national regulators (such as the Health and Safety Executive and the Environment Agency) and local authorities with a view to identifying improvements.

In order for us to get a sound evidence base on which to base our findings from the reviews, it's been crucial for us to hear directly from businesses and individuals so that we get a 'worm’s eye' view of where enforcement can be improved, reduced or done differently, or, where it works really well so that other regulators can learn from it.

The FoE initiative has also been included as a digital by default case study in the BIS Digital Strategy.

We decided to develop a microsite where businesses could offer comments on their experiences of the enforcement of regulation and where we could publish data on regulators. Development of the site started in February 2012, when we created a bespoke site using the BIS WordPress platform. At this stage the site was in pilot form, but incorporated functionality to vote on the final name for the project.

Subsequently, a final version of the site, called Focus on Enforcement, replaced the pilot and was launched in March 2012.

The site has 3 main functions:

We’ve made a number of additions and improvements to the site along the way, in order to enhance our digital engagement and the user experience. For example, we now have a project blog and a Twitter feed linked to our dedicated Focus on Enforcement account. We have noticed that these improvements have had a really positive impact in helping to maintain the volume of traffic to the website.

However, the digital element is only part of the whole process.  We have supplemented this online engagement with more ‘traditional’ engagement methods, such as face to face meetings.

Looking across to the Cabinet Office / Demsoc key goals for open policy, this project has 3 main objectives, namely to:

What worked well for us?

By using social media to publicise the reviews, we greatly increased our audience reach, (compared with our previous traditional consultation), securing responses from SMEs, individuals and front line enforcement officers as well as ‘the usual suspects’.

We had a good quality of responses – more than 85% of responses obtained were significantly useful as evidence in our reviews.

Sustained promotion activity (particularly via social media) has helped to maintain the level of traffic to the website and keep responses coming in.

We receive responses in hours not months – which enables our review teams to identify issues and probe further in real time and, if necessary, take remedial action to keep interest levels up faster.

What has been more challenging?

Initially navigating the system to set up a website was not easy for policy officials without previous experience in this area.

Giving users the ability to make suggestions for future reviews has generated fewer responses than asking for comments on subjects under review.

Some topics have simply proved more popular than others!

What have we learnt?

Keep the questions focused and use plain English and appeal directly to what you believe to be your audiences’ priorities.

Not everything  will work – you need to be prepared to change approach.

Anyone can learn  - (with a little help from the experts!).

A quick turnover in audiences means that there is often a limited amount of time to build up  relationships with each review’s key online communities – so you need to plan in advance for this and move quickly.

Need to keep people engaged and have a clear feedback loop.

Not everyone will feel comfortable commenting publically (esp on sensitive issues) so need to allow people to comment / submit responses anonymously.

Digital is not the only answer but we have been amazed by its benefit - we were clear from the outset that the online review process would compliment, ratherthan replace, more traditional stakeholder engagement and interactions  with interested parties. We continue to think that this ‘dual’ approach has worked really well.

What has been the impact?

The burning question for us is how has social media and digital engagement impacted on policy development and broadened consultation? The headline message is that it has had a hugely positive impact. We think this is for 3 key reasons.

Firstly, it has enabled more open and transparent policy making.

Secondly, it has given us a much stronger evidence base; the comments received through our crowd sourcing and the speed of their receipt have genuinely influenced policy for the better.

Thirdly, using digital tools has significantly changed the nature of the responses and reviews for the better in that we have been able to hear from much wider audience than we would have otherwise been able to reach.

There have been very positive impacts on the team itself. We have significantly increased our digital skills and awareness, something which is a fundamental part of Civil Service Reform. For example, the team took responsibility for monitoring weekly stats for the website, tweeting and blogging, and some team members now have a specific digital engagement objective. We’ve learnt a lot along the way and even managed to convert digital engagement sceptics!

Perhaps most importantly for a policy team entering into this brave new world, we have had the support of our Senior Civil Servant colleagues and a good relationship with the central digital comms team who have really helped us to promote and embed this new way of working.

This blog is about the work of the digital communications team at the Department for Business, Energy and Industrial Strategy (BEIS).