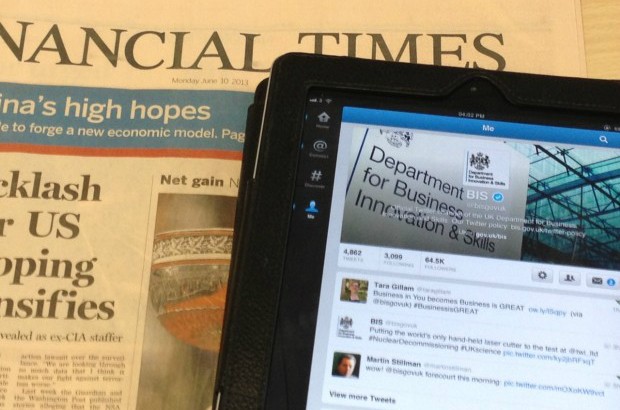 We wanted to enhance social media monitoring, especially Twitter, in the BIS press office, and show that it could be an everyday part of the job without resulting in extra work.

Though much was already being done, it was often ad-hoc, with potential opportunities for online engagement being missed.

The BIS Press Office also had a mixed level of skills and knowledge using Twitter.  It was agreed that the Digital Communications team would devise a series of training workshops specifically using Twitter and Tweetdeck as the first part of our ‘embedding digital’ work programme to ensure that everyone had the same level of expertise in using this social network.

We focused primarily on Twitter as it has become the ‘breaking newswire’ and a primary channel of communication for journalists and the media. We wanted to:

Ultimately it was decided that Press Office would manage their own digital channels and tools to keep apace with the constantly evolving media environment.

Though digital tools had been created in the past (online dashboards, lists on the main corporate Twitter account @bisgovuk) take-up from staff was often low due to hesitancy with unfamiliar online systems and the concern this would add to workloads. Some press officers were also uncomfortable in using their own Twitter account or setting up personal accounts (often because it was unfamiliar or they had negative perceptions of how Twitter worked). We proposed the creation of an official BIS Press Office account, and that every press officer was trained to the same standard.

We devised a series of weekly training sessions which were delivered over a 2 month period.  We went into the basics of Twitter; creating your own account; hints and tips on monitoring and using hashtags, and on a practical level, how to highlight and illustrate a minister’s visit using photos and quotes

What did we learn?

What are we doing next?

This is an ongoing progress, but one which is already delivering benefits in how we are working together and the way the department is engaging media online.  And we’re expanding and building on that approach.  For the recent launch of the draft Consumer Bill of Rights, for example, we worked with press office to include more  online contacts in launch and pre-launch events, and that's something we'll be doing more of.

We’ll keep you posted on progress as our approach develops further.